After some testing, it appears that the audio quality is a bit poor when using the 3.5mm audio output on the Pi.

The video quality looks great, but the audio sounds a little garbled, it’s more noticeable on music rather than dialogue.

I know it’s not an issue with the stream as such, as I can use VLC to stream the video to my Mac and the audio sounds great.

Maybe it’s a limitation of the Pi’s audio decoding abilities?

I’ve tried adjusting the audio settings for the stream, but it doesn’t seem to have any effect on the quality output from the Pi.

The only other option I can think of is to try outputting the audio via HDMI instead and use an HDMI audio splitter?

UPDATE:
OK, so I’m having issues using this setup when using a HDMI output from a Windows 10 laptop.

It works fine from and Apple TV, an Xbox one and a MacBook, but there’s something about the external monitor settings when using the HDMI port on the windows laptop that isn’t compatible.

I’ve tried all of the obvious things such as adjusting the output resolution and refresh rate settings in the display adapter settings, but I just can’t get the HDMI encoder to create a stream that works with the info-beamer/Pi setup.

There’s something that the MacBook does that makes it work fine, just plug in the HDMI cable and it works?

I’ve attached an image of the external display settings of the macbook that work.

Has anyone got any ideas?

I am attempting this setup, I have the same encoder box, but I am just getting a black screen on the Pi. I’m just checking, when you say you pasted the address into the video streaming configuration box, is this on the Pi running the video wall player, or on another Pi running the multicast videos streamer?

Hi dan, I was using the scheduled player setup, and added the livestream content, this is where I entered the stream url.

After much help and assistance from Florian we got this working reliably, the Scheduled Player package was updated and this made the stream much more reliable.

The performance settings in the device configuration settings for the Pi were also set to ‘Performance’ mode.

I still don’t really understand what makes the HDMI output from a Macbook, AppleTV and Xbox easier to create a stream from than the windows laptops I tried? 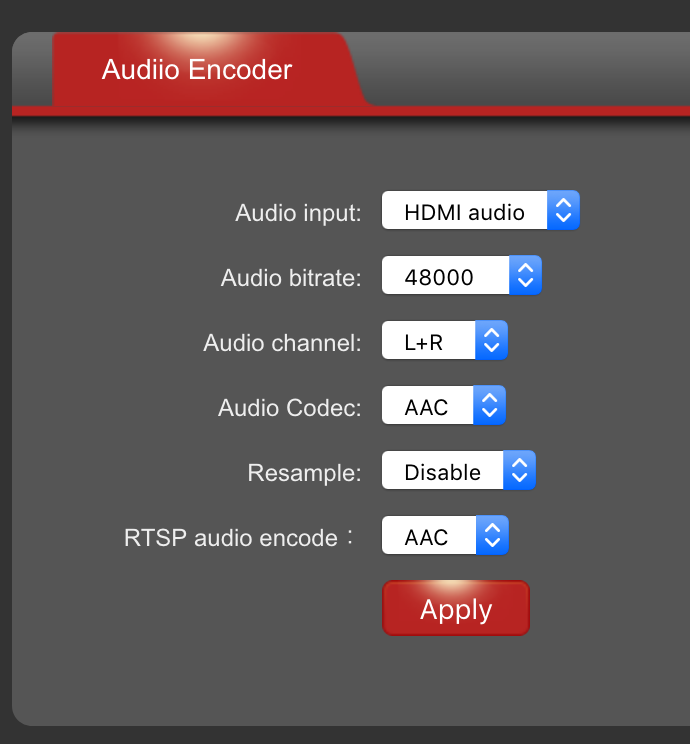 Oh, and when you say you just get a black screen, is it the ‘video lost’ screen from the TBS2603 or just a completely black screen?

This is how the stream url looks when I add a ‘stream’ content to the scheduled player ( ignore the odd dimensions, we were testing