It is possible to get the serial number using

But is it possible to get the MAC address?

In theory that could be added, although I’m a bit hesitant for the following reasons: The SERIAL is something that’s device specific. The MAC address might not be, as you can switch out the WiFi dongle on older device. In addition, right now info-beamer OS only uses one network device at a time, so it’s either Ethernet or WiFi. But that’s not set in stone. In the future there might be an option for a device to have both active at the same time and switch between. So the MAC address isn’t necessarily fixed or a single value, which can’t be represented really as the sys.get_env is only set once when info-beamer starts. So even if that’s added today, it might break in the future.

What would be the use case for the MAC address?

This is tricky. Some customers have their WiFi secured with MAC validation, and this is why I would like to have the MAC address visible on the screen.

BUT the screen I have can show using LUA is only visible AFTER the device have had contact with the server - so this is no good anyway.

Maybe a solution is to show (optional?) the MAC address on the WiFi AP screen: 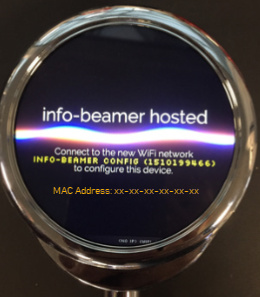 This way it will only show the MAC address when “needed”.

The welcome screen already shows the IP/MAC address in the bottom row. But I was never prepared for a round screen

Would it be enough to show the MAC on the HTML WiFi configuration page that the users access when they use the WiFiUI method? That way it doesn’t clutter the screen.

Yes - that would be absolutely fine

Ok. Expect that in the testing release soon then

Uff. That took longer than planned. The current testing release now has the feature. There’s a new link on the config page: 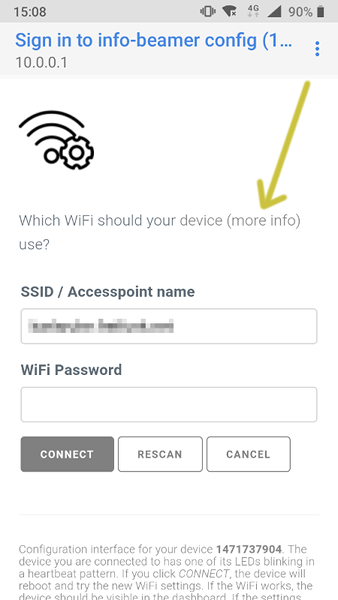 Clicking that ends up on this page: 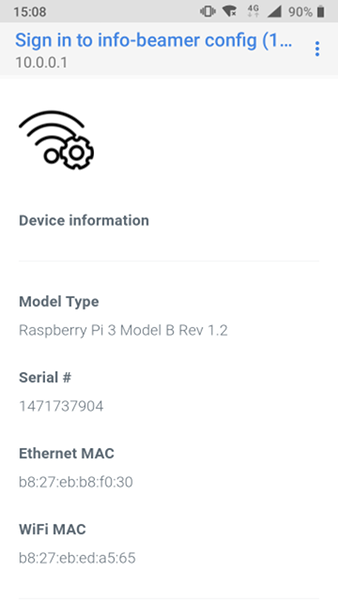