Yesterday the Pi Zero 2 W was released. It’s essentially the same form factor as the original Pi Zero, except with the CPU power of the Pi 3. Memory is still kept at 512MB, which is perfectly fine for most info-beamer content. 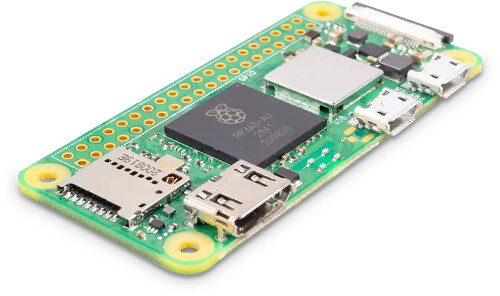 Initial testing shows that it works quite well and is a serious alternative if you don’t need any of the features exclusive to the Pi4 like 4K video or dual video output. If you can live without them, the Pi Zero 2 seems like a great choice as it’s quite a bit cheaper (it costs around $15) than the original Pi3.

Support for info-beamer hosted OS isn’t official yet, but you can expect a new testing release early next week.

Like with the Pi Zero One, we have the issue of the missing RJ45 Ethernet Port. As it is recommended to use InfoBeamer via wired LAN I wonder which solution you may be supporting in the future: Micro USB Ethernet Adapter or HAT with GPIO access? Any ideas?

There a no plans to support external Ethernet adapters for devices that don’t have one by default (so Pi Zero, Pi 3A+ or the new Pi Zero 2).

The reason WiFi is not recommended is that WiFi tends to be more fragile if not managed properly: So reception might be poor due to router/Pi placement or someone might change the SSID without properly thinking about what’s affected by that. If you operate your own dedicated WiFi, using it is perfectly fine.

Any news on the new testing release for the pi zero 2 w?

Released now. You can get it here. Feedback welcome.

Downloaded and testing now. Thank you!

Any Chance that Pi Zero 2 W will support the browser package?

Unlikely: Chrome requires too much memory for the Pi Zero

Thanks. Will look into that.

Ah thought so. Any other idea to display webpages on these? We need them for dashboards. If not we will opt for higher powered PI’s.

These issues you reported are all fixed now. I suggest you download either the ZIP or IMG variant and redo the installation.

They were all results from the same root cause: A required directory (/config) wasn’t present in the compressed root file system. It then couldn’t create a ram disk there while booting ("/system/config failed: No such file or directory") and every error that followed was caused by that missing directory. The reason the directory was missing in the testing release is that git, the version control system used during development, doesn’t really handle empty directories. So everything worked perfectly fine while working in the bleeding version of the OS. But once I switched over to testing the directory was removed by git and all those errors appeared.

Thanks again for reporting.

If you want to display publicly accessible pages you can use the scheduled player. It uses server-side rendering for web content (with all the downsides that this entails). But it works on any Pi. Otherwise, if you want a locally running browser on the Pi, one of the bigger Pi variants is the only alternative.

Thank you for your fast and amazing support! I will test the new release and report back if i find any issues.

The schedueled player works for our purpose, but is there any way use Sites that need a login?

is there any way use Sites that need a login?

Unfortunately not. The closest thing you might do is use secret urls instead of username/password based auth.