Pi4 user would like 2 synchronised videos on one device

Is there a way to play 2 unique HD videos on the two hdmi outputs in a truly synchronised manner? Will they not go out of synch after a certain time?

I would like to do this on a stand-alone basis (at first).

That should in theory be possible, although we don’t really have experience with that use case yet. The way this would work is to have a package that:

With the new video engine, it should also be possible in the future add a “linked video player” feature that would allow two or more videos to run on the same internal timer. But nothing like that is added at the moment.

The other possibility would to to merge both videos into a single 3840x1080 HEVC/H265 encoded video and just place that single video across both screens.

As Florian has said you could create a single 3840x1080 video, however it’s not possible to upload such a large asset, so I cut the video into a left/right half and uploaded them individually and then placed them side by side in the setup page.

Florian, will the upload size limit of 500mb be increased at any point?

As Florian has said you could create a single 3840x1080 video, however it’s not possible to upload such a large asset,

Very important: It’s not yet possible. Of course that is something that will be added in the near future, otherwise the whole HEVC decoding would be pretty useless

As the higher res videos will be larger too, the limit will also be raised. I’ll have to check a few things for that though, so that’s probably going to happen together with the HEVC video upload support.

Thank-you for your quick and thoughtful reply.

You beat me to asking about about the two-screen video-wall possibility, very interesting option in my case. Naturally synchronised.

Do I understand correctly that this possibility is available on the current download of Info-Beamer
Pi?

Thank-you for your input. Did not know about the limit or the 2-file method.

I have not tried the software yet, I imagine the two files are played (started) one following the other with two clicks. Can they be scheduled to start at a certain time?

Hi, here’s a screenshot of a test setup for the Pi4 Scheduled Player.

Because the two video files are actually cropped from the same ‘master’ video, they are the same duration etc, and then just placed side by side in the setup. 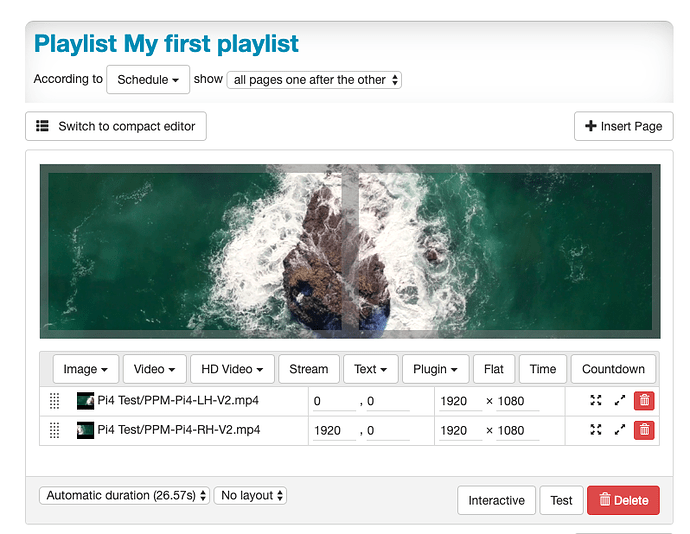