When deleting a medallion it automatically resets and boots into the “Install me” mode.

Is it possible to make something simular with the WiFi setting, so the device will go into AP mode to wait for the user to setup the WiFi again?

(But without removing the device-connect-key.txt)

You mean forcing the WiFi UI, without having to wait the minute before it starts and having it run until some changes are made? Right now that’s not possible, although adding something like /config/force-wifi-ui or similar could be added. This would then:

Having the /config/force-wifi-ui feature would prevent the device from connecting to an existing configured WiFi unless that user manually uses the UI to reconfigure the device. This means that the UI is permanently running and without the WiFI UI password, no progress can be made. Meanwhile the device is offline for the whole time and will be unreachable by the info-beamer service, even if the current settings still work.

So it seems like a risky setting to have and one that can’t be applied using the device config API as the device won’t be online once the device reboots after applying the configuration change. This is treated as a configuration failure and the change is reverted.

I’m not sure that’s all worth it, considering that all it takes with the existing method is to wait the 60 seconds. What do you think?

As I’m in the process of deploying lots of Pi’s to different locations, I’m loving the wifi_ui option.

It means I can pre-load multiple sd cards, take a load of Pi’s with me and then just setup the wifi when I’m at the location.

I know this might not be the standarad problem for your cusstomers, but let me explain my (temporary) problem.
At the moment we have some guys showing off the displays for different customers and they all have it setup for WiFi using their phones (no wired option is available on our hardware). Our customers takes over the displays but needs to put it on their own network. After they have installed different content on it, they transport it to the final destination, where it needs to be setup again.
Sometimes they want to move it to another location…

This is NOT something that are going to continue this way in all future, but if there were an easy way to make a TOTAL reset of the displays - including the WiFi settings - it would be a nice-to-have feature.

At the moment we have no way to know if the displays are connected or in WiFi AP mode.

I’m still not entirely sure I understand the problem. If you move a WiFi configured device to a new location and that configuration doesn’t work due to different WiFi parameters and WiFi UI is configured, the WiFi UI will pop up after ~60 seconds. I guess the problem results from:

At the moment we have no way to know if the displays are connected or in WiFi AP mode.

which is a result of the round screens you use that prevent you from seeing the WiFi UI overlay icon in the top left corner? If so, do you see the LEDs of the Pi? One of them also starts to pulse in a heartbeat pattern while the WiFi UI is active.

Yes - we can’t see the corners of the screen

Also we have no view access to the RPi.
What I want is (just) something like the “Delete” device, but where the WiFi setting is also erased, so the customer would have to setup everything from scratch again. When I reset it, the device boots into our default screen (with serial number etc) but the customer cannot see that it does not have access to the internet, thus giving him trouble understanding why he cannot add it like the screen tells him no.
But as I said - it isn’t a BIG problem, and we are working to find a better solution (with access to the LEDs)
Also we might need to add additional information on our default screen. I don’t know if it is possible to add some connectivity information on the screen, if the device does not have WiFi? I’ll look into this.

I could add an option to place the WiFi UI notification icon somewhere else (e.g. centered or to a specific coordinate), if that helps?

No - when the device is booted for the first time, it shows the WiFi AP name on the screen if the WiFi is not setup. That’s the screen I would like to have the device show again somehow.
The only way to get this screen back is to format the SD card and install Info-Beamer again.

No screen that info-beamer shows by default does that. Is that your branding.jpg/mp4? I think I start to understand, correct me if I’m wrong:

You demo the device to some customer. When preparing for the next you delete the device at the customers location which triggers the following steps:

Now the device is moved to a new location:

Yes, and the screen I need is this one: 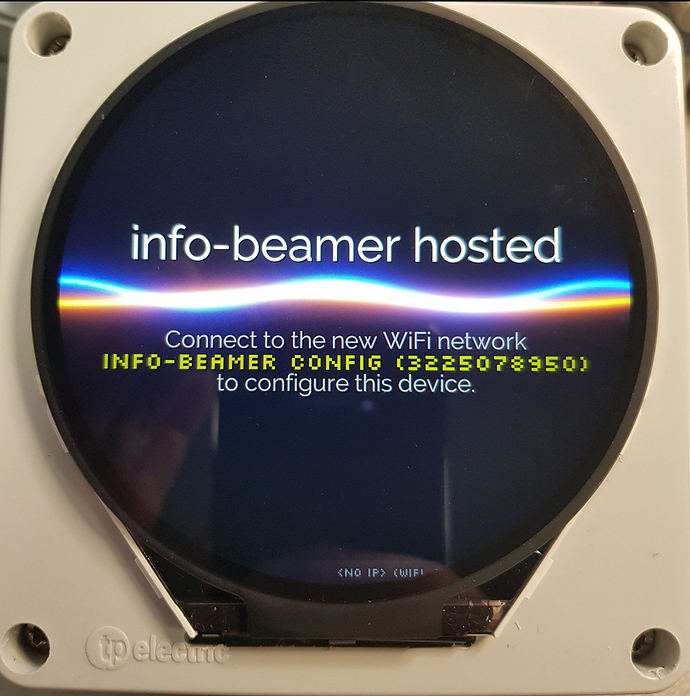 Oh. Oops. Totally forgot that one. That is shown when the device didn’t switch to an assigned setup and WiFi UI becomes active.

I have noticed that some TV screens are ‘zoomed in’ by default, cropping off the image in all sides, which has meant that I’ve been unable to see the flashing wifi_ui icon in the top left corner, but I just wait for a while and then scan for the info-beamer wifi config network.

Be sure to disable that zoom behavior in the display settings. There’s really little reason today to have that. On the welcome screen there are four little white dots in each corner. If you don’t see those, your display setup is wrong and should be corrected, so the complete HDMI output is visible.

Apparently TV manufacturers often set their TVs to a zoom setting by default.

I’ve read that this is to prevent any artifacts used in broadcast TV to show around the edge of the picture, and so reduce the chance of a customer complaint.

I don’t even think that broadcasters use this method of adding things to the overscan area any more, I used to see small black and white bars in the corner of the screen just before adverts years ago.

It’s annoying as it also messes with the 1:1 pixel mapping and introduces scaling.

It’s annoying as it also messes with the 1:1 pixel mapping and introduces scaling.

Yeah. As a result an otherwise sharp output might look blurry.

Wasn’t teletext broadcasted that way? Looks like it: https://en.wikipedia.org/wiki/Overscan

Sory for the delay (holiday + business trip)
Yes - the device is going into offline mode and WiFi UI - but the customer does not understand this as it is only indicated (on the round screens) by a wrong IP number at the bottom (0.0.0.0).
What I would like to have, is an option to make a TOTAL reset for the device - including the WiFi setting, so is it just like the first time the device is booted without network settings (the config folder must stay)

Sorry, I still don’t understand. When you delete a device from an account it wipes/reformats the complete data partition thereby totally resetting everything previously downloaded/assigned to a device. The only part that isn’t touched is the OS files and the /config directory. What you get is exactly the same as when you setup a new device by unzipping install.zip and then adding the /config directory. The only difference is that during the initial setup, the device will repartition the SD card, but that step doesn’t have any effect on anything that follows.

There’s no such thing as resetting WiFi settings: They either exist in /config/wireless or /config/wpa.conf or not. There is no hidden/resettable networking state besides those two files. If the settings work, the device has network. If they don’t and you have /config/wifi_ui set, the device will start its adhoc configuration WiFi network after ~60 seconds and show this screen…

…for the first 10 minutes, provided that you don’t have your own /config/branding.jpg/mp4. If you have your own branding, that text is only shown at the bottom text row.

I feel like we’re going in circles getting nowhere as I think I still don’t fully understand the events that do happen or should happen. I just configured my own Pi with WiFi settings that don’t work, enabled wifi_ui and then deleted the device from my account and I get the text from the image above after the reboot that follows the device deletion.

I do not use the branding at the moment.
My problem is exactly that it does NOT show the config screen if the WiFi has been setup somewhere else. This screen is ONLY shown the first time the device is installed from new. Afterwards it “just” goes into offline mode and showing the content (and opens for AP/config mode in the background)
But if you say that the config screen will show after a device deletinon - I’ll have to test to make sure.
I’ll get back with a story board and pictures when I have the time.

This screen is ONLY shown the first time the device is installed from new.

Close but not exactly: The welcome screen is only shown if the device isn’t registered/has registered itself (using /config/device-connect-key.txt). It doesn’t matter if the device was just set up or if it was deleted. The result is the same.

If it’s already registered and content has already been downloaded locally, the device immediately switches to that content and then (as you said) does all the wifi UI stuff in the background with no indicator other than the blinking WiFi icon in the top left corner.

If your workflow is:

If on the other hand it’s done like this:

Ok! I sounds like I can use the first workflow.Then I just need to describe the procedure for our sales people so they know that they have to delete it and let it boot before they move it.

Would this be the correct workflow:

What they do today: