Hi, just updated our packages to be compatible with the Pi4, and noticed that it’s possible to select the dual outputs

I’m guessing that the description box has the resolution values mixed up? 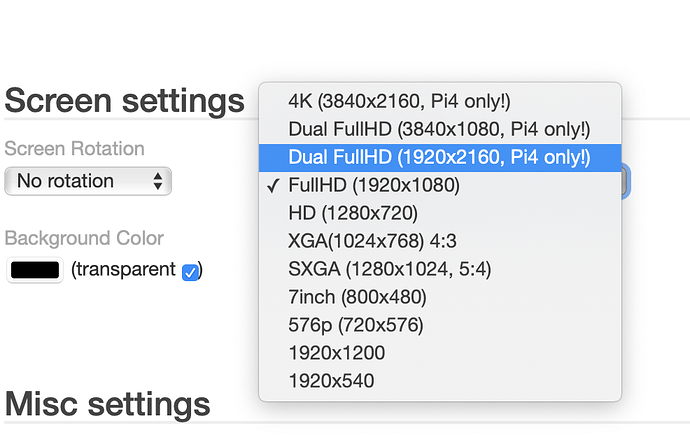 So if I just want two identical full HD 1920x1080 outputs from the Pi4 what should I select?

Just select 1920x1080 in that case. After all that’s the content you want to produce. How that’s then displayed is not in the hands of the setup and the setup cannot know if it’s used on a Pi4 or not. That’s the device’s job.

Sorry for accusing you of making an error!

I will have a play around with it as soon as my Pi4 arrives, I’m assuming that the amount of RAM won’t make any difference?

I’m guessing Pi4 compatible setups capable of running ok on all models of the Pi4?

For most setups, the 1GB version should be enough, although the OS will reserve 512MB of GPU memory by default on the Pi4 at the moment. For a Pi3 (with also 1GB), only 256MB is reserved. So essentially, with a 1GB Pi4, the OS has 256MB of memory less to work with. Most of the time that shouldn’t really be an issue though.

) which can easily eat up 256MB on its own. This might be something that’s going to change in the future as I think 384MB should be enough. We’ll see. In summary: the 1GB version should be fine.