I have divided my multi-screen video into small 1minute chunks and uploaded it to info-beamer hosted. Mostly this works pretty well. My client at the museum says that there is consistent audio dropout i.e. silence at a number of the minute transitions. Does anyone have insight into what might improve the audio? Is there some audio switch to ffmpeg that I should have used while dividing up the video?

How do you play audio? Analog or HDMI? There has been a bug in the Pi firmware that has finally been fixed recently after 2 years that might cause that. The recent OS release 10 should include a fixed firmware for that.

One system uses HDMI, one uses the Analog.
I don’t remember which one is the one with the audio problem but I will ask the client.

How should I update the device to OS10? It’s a beamer-hosted Pi in Iceland and I’m in the Czech Republic. My client doesn’t know much about linux, but could be instructed to unplug things if needed.

Upgrading is as simple as this: 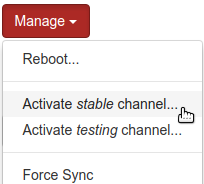