When using Scheduled Player and adding a stream, does it use the same url as the package Live Streaming? I tried to add the same URL and it does not play where is does within live streaming package. The URL is https://youtube.com/watch?v=...

It’s not the same. The Live Streaming package works by starting an instance of streamlink in the background. This is a wrapper around “streams” that tries to extract the HLS source url and then passes through the stream to the info-beamer video player.

The code in the Scheduled Player only plays sources that don’t require any browser magic to make them work. So only sources that directly supply video data like HLS urls, UDP or RTP unicast or multicast streams.

Many thanks. Look forward to in the future if schedule player could support this.

I’m looking for a solution to use the scheduled player to play images and videos from assets uploaded via the dashboard, and then schedule a playlist to play a video stream from the local network at specific times.

If a video output ( HDMI etc ) can be converted to a stream, I’m guessing via a hardware encoder, and then the resulting stream played via the local network.

Would it just require the local network address of the stream to be added to the video stream configuration box in the setup?

Yes. That’s how it would work. You need some hardware that directly generates such a stream though. So HLS, RTP or raw UDP.

If it wasn’t HDMI input but something like the Pi camera, you could even use the Multicast Video Streamer Package to generate such a stream. Thinking about it, it might be possible to use that in combination with this hardware encoder that (from what I understand) behaves like a Pi camera: https://auvidea.com/b101-hdmi-to-csi-2-bridge-15-pin-fpc/

I just ordered the B101 addon. I’ll check it out to see if it works with the Multicaster Package.

I’ve been experimenting with different streams, and even streams that I know contain audio don’t output any audio from the Pi’s HDMI.

Is there any option to allow audio to be played from the stream via the Pi’s HDMI output?

The option to play audio was added to the video files, could this be done with streams?

Done now in beta15. I’ve confirmed this to work with a HLS stream with audio. Just update your package and you’re good to go.

Wow, this is fantastic

I’ll be experimenting with this tomorrow, this also ties in beautifully with my other request regarding playing football match highlights at half-time, as if we can just capture the video that is already being sent to one of the screens, and then use an encoder to generate a stream on the local network, and then add the stream url to the scheduled player, the process of adding the videos to the Pi can be automated using info-beamer!

I’ve been experimenting with this and it works really well.

I’m using a BBC stream to test it at the moment ( http://a.files.bbci.co.uk/media/live/manifesto/audio_video/simulcast/hls/uk/hls_tablet/ak/bbc_one_london.m3u8 )

The only issue is that the current video background we have, that displays advertising around the main video content is currently around 2 mins in duration, and I’ve set it to loop, when it loops it causes the stream to ‘jump’ and restart.

I guess the solution to this would be to make a background video that is the full duration of the half-time, so it doesn’t loop.

I’m looking at this device for creating a stream from an HDMI input.

Can anyone advise if this will indeed create the required stream on the local network, suitable to be added as a stream using the Scheduled Player.

I just want to set it up to automatically take the HDMI input and output it to the local network as a stream, and control when it will be displayed by scheduling the playlist that contains the stream url generated from this device.

Found a Youtube video about the encoder showing screenshots of the web interface: https://www.youtube.com/watch?v=BBWv9C_yeXM

On Amazon there are a couple of questions/answers about the device:

Does this device encode to a HLS steam on the local network with a .m3u8 extension ?

No sorry there is no HLS support, you would need to use something like FFmpeg to create HLS stream.
By PCIEX SELLER on 03 August 2018

You don’t need HLS. HLS is a pull protocol, so devices that want to receive a stream pull from some url.

This device sends out multicast to your (local) network instead. So it pushes out a stream. All devices (including the Pi) can receive the stream that way and decode it. As I said: In theory. I have this working with other hardware and the multicaster package, but I don’t know what to expect from this one.

Thanks Florian, yeah, I think it should work, and at that price it’s not too much more than buying a Pi and the required hardware.

Also, I really need something that is ‘plug n play’ and bulletproof in terms of reliability, as on a match day the last thing we want is for it to not work!

Great work on this Florian

It seems that the system I want to integrate with uses the Vmix software, I’ve just had a quick look at the specs and I’m really hoping that it’s possible to grab a compatible stream from this and send it over the local network and be picked up by the stream player by adding it’s url into the stream settings.

Here’s a description from the spec sheet:

That’s a fairly non-technical spec sheet and I don’t see anything that indicates that the software can stream anything other than RTMP. That won’t work with info-beamer.

So I just pasted this address into the Video Streaming Configuration url box and it worked.

The audio was output via the Pi’s 3.5mm audio output without any problems too

It’s working really well, I didn’t need to change many settings at all, I just left most at their default values. 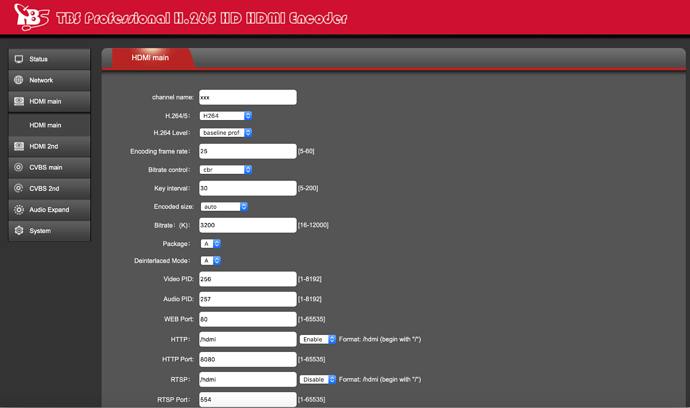 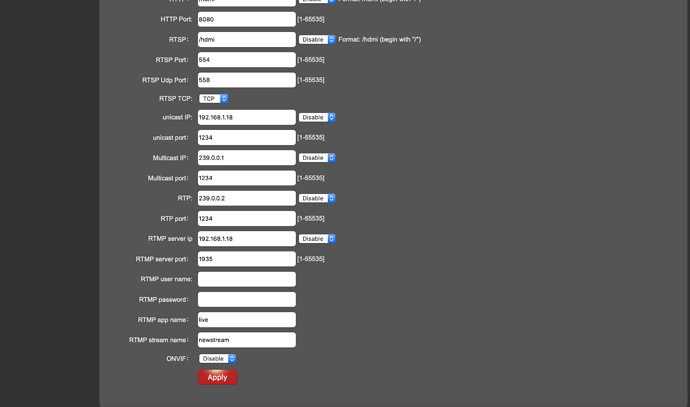 Also, just to confirm, I’m using this encoder to convert an HDMI input to a url stream, and overlaying the stream on top of a video background layer, which in effect gives a side and bottom banner area for additional content.

For testing purposes, I fed it from an AppleTV, with both devices connected via ethernet on my LAN.

I just set the duration to 10000 seconds, in practice this just needs to be long enough for the duration of the content.

So with the recent additions of audio output for streams, and the ability to set a custom duration, the scheduled player is awesome!