I’m looking at ways in which I can use info-beamer in a live sports scenario, primarily football matches.

The idea is to have either static image or video files playing, which would contain sponsor adverts from the Pi to a big screen, but to also have an overlay at the top of the screen that can be customised to include team logos and also be able to display the current score, which would obviously require a simple and quick method of updating when a goal is scored.

I’d also like to be able to have the ability to switch to a ‘Goal’ message whenever a goal is scored. I was thinking of a second Pi that is just constantly playing an animated ‘Goal’ message, and by using a simple HDMI input switcher the message could be displayed on screen for a few seconds.

I appreciate that this is pretty complex, especially the live score overlay, but is this something that can be done?

This post has a similar request: Ideas needed for a dynamic news ticker to be added

Maybe there’s a way of creating a ‘dashboard’ in Dash, and using that as a live stream section and display that at the top of the screen, then the information can be updated in realtime via Dash?

I’m just typing this as I think about it, so this may not be possible!

You don’t need external tools. I’m building a sports streaming package for another client that has a stream area with 80% size. The remaining area is filled with ads or other information. The package can also switch between 80% stream and fullscreen or other views based on a playlist. Triggering external events can be done using the device command API endpoint and as an example we’ve added the ability to show a full screen image. But any other action is possible as well.

This package is work in progress and not publicly available at the moment. But the client has mentioned that open sourcing the result is a possible option.

Have a look at this blog post as an example of how triggering events might work: https://info-beamer.com/blog/introducing-device-remote-control-interfaces. You can install the package by clicking the orange Run on info-beamer button. Create a setup based on it, then install it to a device. If you then visit the device page, you’ll see a new interface that allows you to directly control the device right from the device page in real time: 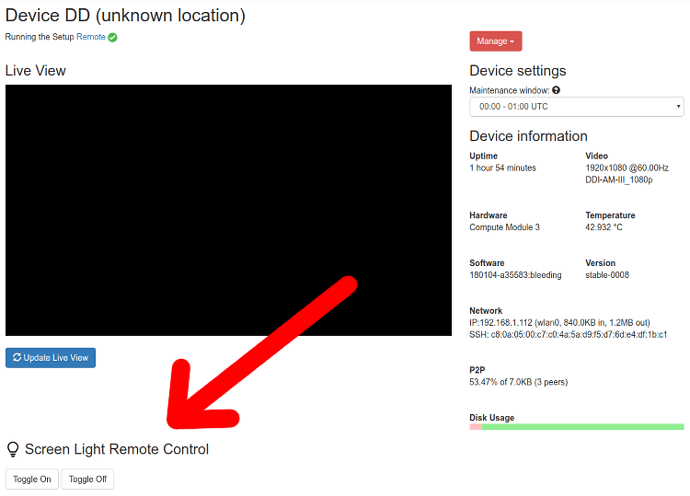 Sounds fantastic, we need a solution at very short notice, is there a way this can be built to order?

But sure. Provided there’s a complete list of things your package should be able to do, that’s absolutely something that can be done. Most likely in a short time as info-beamer hosted offers most required “infrastructure” functions already. You can the import your custom package into your account, just like all other packages and install them on your devices.

I guess we’ll use email for details?